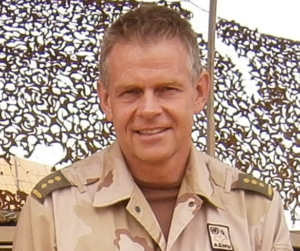 Colonel Hans van Dalen started his military career in the 1981 at the Dutch Royal Military Academy. After serving several years as subaltern officer in mechanized infantry units, he switched to the armor-branch in order to enhance his knowledge on maneuver warfare.
His career is a mixture of serving within operational Army units, Army training and knowledge institutions and position within the Defense and Army intelligence branches.
Colonel Hans van Dalen was four times deployed on operational missions in Bosnia-Herzegovina, Macedonia and Afghanistan. He also executed several operational working visits to the Balkans, Iraq and Afghanistan. Col van Dalen has also personal experience with CD&E methodology. He experimented with future operational concepts during his training job and even during his tour as leading intelligence officer within Task Force Uruzgan (Afghanistan).
Colonel van Dalen also was employed as the Head of Directorate Land Warfare within the Land Warfare Centre and was responsible for development of international and national doctrine together with the development of operational and organizational concepts for future warfare.
His last deployment was commander of the leading intelligence unit (ASIFU) of the United Nations MINUSMA mission in Mali. After this deployment he assumed command of the Netherlands Joint Intelligence Command (JISTARC), dealing with preparation and deployment of intelligence units, including experimentation, knowledge production and future development of the Army Intelligence. Next Col van Dalen was posted to Headquarter Netherlands Army in Utrecht as Head of Current Army Operations. In this assignment he was responsible for major operations, exercises and handling of emergencies within the Dutch Army. Nowadays he is serving as deputy commander of Education and Training Command RNLA.
Next to his other assignments colonel van Dalen is also proudly serving as the Regimental Commander of the famous Regiment Hussars van Boreel.
Colonel van Dalen has written some articles on Future Warfare, Maneuver Warfare en Information Warfare.

This website uses cookies to improve your experience while you navigate through the website. Out of these, the cookies that are categorized as necessary are stored on your browser as they are essential for the working of basic functionalities of the website. We also use third-party cookies that help us analyze and understand how you use this website. These cookies will be stored in your browser only with your consent. You also have the option to opt-out of these cookies. But opting out of some of these cookies may affect your browsing experience.
Necessary Altijd ingeschakeld
Necessary cookies are absolutely essential for the website to function properly. This category only includes cookies that ensures basic functionalities and security features of the website. These cookies do not store any personal information.
Non-necessary
Any cookies that may not be particularly necessary for the website to function and is used specifically to collect user personal data via analytics, ads, other embedded contents are termed as non-necessary cookies. It is mandatory to procure user consent prior to running these cookies on your website.
OPSLAAN & ACCEPTEREN